“God bless you and your family; have a wonderful day.”

The mantra was part of him now. He’d said it hundreds of times daily for how long, he couldn’t tell you. Pan-handling in front of Pike Place Market was the most proficient career choice for Edmund. He set his own hours, enjoyed the fresh sea air coming in off the bay and had the opportunity to interact with a wide variety of interesting people who crossed his path as he blessed their comings and goings.

The streets of Seattle were Edmund’s ministry; his place where God resonated most powerfully. Whomever you believed your God was, is or would come to be, he was there to speak to you about that!

It was in these moments that angels descended and danced around him while birds chirped and thunder hailed the truths emerging from his lips and heart in the middle of the market on a Monday morning. He would ask you for money, bless you anyway and go forth in life breathing, being, and watching you walk by trying to pretend you didn’t see him.

“Is there something that all of you expect me to do?” Edmund would ask “ ‘cause I’m not sure what it is. God bless you and your family; have a wonderful day.”

People flowed around him like water, diverging them as if he’d put his staff down and parted the ocean of humanity that surged ahead, bent on consumption like a swarm of locusts. Every once in a while a person would be caught up in an Edmund eddy and swirl about him as he caught them in his kind gaze, enraptured by his radical acceptance of who and what they were; thin, fat, rich, not-so-rich…and so it went day in day out for time eternal.

Edmond pressed on this day with his teachings and pan-handling, taking the souls passing him by as simply part of the whole process when a woman – middle aged, plump and unremarkable – approached him, caught in his vortex.

“Excuse me ma’am, do you have a dollar you can spare. If not that’s ok God bless you and your family and have a wonderful day.” His smile was full and kind on his face and then she took out a twenty dollar bill; clean, crisp and green as a verdant garden. She held it out to Edmond and smiled back at him. For a moment they looked at one another as though life-long friends. He took her money with gratitude equaling the generous act in which it had been given. Their heads bowed together in what first appeared as prayer, or was it a secret incantation of healing? Their voices spoke softly such that no one around could hear them any longer; hushed tones pulling you in closer in a market full of chaotic enterprise. Silent they stood, smiles lingering upon their lips. She wordlessly whispered her secrets to him and he took her confessional into his strong, street savvy arms, removing the pain she’d been carrying for far too long. For the exchange of a $20 he had released a lifetime of her anguish and she hugged him, joy oozing out between their embrace. From the corner where I stood witnessing the whole exchange it appeared that she’d given up something huge, that he’d absorbed a massive tumor of her grief. A bird chirped in the distance, the woman’s countenance expanded. Her face lit up in a radiant glow and all within a breath of a moment caught in your chest, she was a wholly remarkable woman in her full beauty and strength of being.

Edmond, the pan-handling preacher of Pike Place, raised his arms in an act of sanctification.

“Holy Mother of whatever God you choose to believe in…heal this sister of salvation and forgive her every iniquity in this world filled with thieves and liars. She is an innocent among the guilty, a survivor among the fallen, a triumphant warrior standing in the face of every obstacle. Bless her and be blessed BY her!”

The pair fell to their knees weeping for all the hurt in the world. Traffic stopped, people paid attention, birds began their incantation to heaven, lifting them up in a thunderstorm of emotion. Cascadia rose and fell shattering the earth then leaving it to settle into its new pattern on the shaken surface while underneath tectonic plates continued slowly colliding. Awareness reset itself. Truth prevailed once more over bull-shit reasonings of an unremarkable life, forcing back relentlessly absurd ways of being. Social norms folded back in on themselves, lost no more, appropriately sourced within the center of her authentic sense of self.

The woman rose from the ground, brushed the dirt from her skirt, adjusted her bra and walked on confidently. Edmond stood in the place he always stood watching the people he always watched when his eyes fell upon me.

The ground I stood upon was not the same as it was half-a-breath ago. 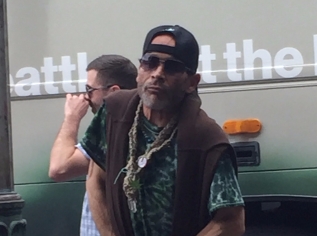 Author’s note: Waiting to catch the Light Rail to the Seattle airport I had time to spare and enjoy the last bits of my long weekend on the West coast when I heard this guy doing his thing on this corner. There was, indeed, a woman who came up to him, gave him money, talked with him for a while, and hugged him repeatedly. This interaction fascinated me as he looked so tough and she looked so unlikely to be hugging a homeless guy on the street so I riffed on the scene I had just witnessed and came up with this story. With a four-hour delay at the airport I set Mike’s music, Angel’s (parts 1-2), to my audio capture using the Hokusi audio editing ap in my phone.  MMN