Some months ago I began a fascinating project with composer, Mike von der Nahmer, and writer, Anita Prestidge. Mike put me and Anita together and said “Go, write a libretto about a woman, her daughter and their emigration story.” Anita and I, having never met, jumped in with both feet brainstorming over the phone while cooking dinner or Skyping after the kids had gone off to bed and left us alone. We’ve forged a close connection, the three of us, and we’re discovering ways of working that allow for a lovely reciprocity to occur. Along the way we’ve had the pleasure of meeting wonderful people who have helped us in the making of this work.

Here is a sample of our project, ‘Blue Hum.”

You won’t actually hear the words Anita and I have written; that will have to wait until July when ‘Blue Hum’ is performed with an orchestra and singers in Toronto. But suffice to say, the story comes from the two of us and has given Mike something juicy to dig his magnificant composer fingers into. You will hear the voices represented in the piano part. It’s been a great process to go through together and we all are excited for the premiere in Toronto.

This section is from the third movement of a four movement piece composed by Peter Michael von der Nahmer with libretto by Marianna Mott Newirth & Anita Prestidge. Illustration by Emely Francesca Perés. 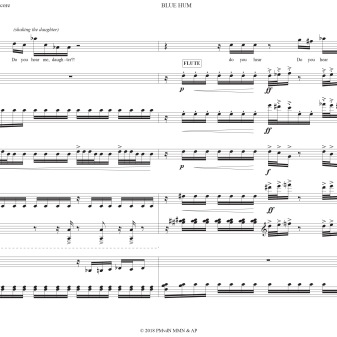 2 thoughts on “‘Blue Hum’ an Art-Song in the Making”